Virgil Earp was elected the city’s first Marshal in 1887, the same year the city was incorporated. He lived with his wife Allie in a house at 528 West H Street which still stands today.


The title of Town Marshal was changed to Chief of Police, a position appointed by the City Council, in the early 1900s. Originally the town marshal owned his own horse but administered police service from the new city hall in 1890. He booked prisoners, after transporting them in a wheelbarrow, into a 2-room cell too low for a man to stand in. Colton grew in square mileage, which required the council to furnish a horse. They raised the Chief's salary to $75 per month. 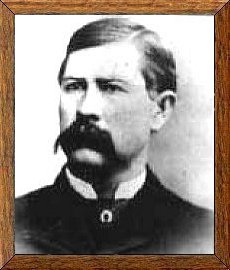 A Foundation of Law & Order
A strong foundation for law and order was built as Colton entered the 20th century. In 1884, the last convict was hanged in San Bernardino for a Colton homicide stemming from a love triangle. The century cost the lives of two officers in police shootings during 1927. In 1937, the city purchased two police cars and two motorcycles. Technology, as primitive as it was, allowed the placement of radios in both of those cars. The police now required a chief, an assistant chief, 2 sergeants, 2 motor officers, and 4 patrolmen.
Technological Advances
In early 1932, the Police Department recruited its original citizen volunteers as merchants walked nightly patrols for the beat officers. Throughout the 1930s, vagrancy and hobos impacted the police calls for service. Police from all over California looked upon Colton, the Hub City, as an important point to observe the transient flow for wanted suspects. By 1940, the police department installed radios in all their police cars and the station. The frequency was shared by neighboring cities and this remained a constant through the early 1970s. Complaints of speeding vehicles, curfew violations, panhandling, and burglaries have dominated police calls for 100 years.


Colton’s Police Department is staffed with 57 sworn officers and 40 non-sworn employees. The City is approximately 16 square miles, with an approximate population of 65,000. The Department has a variety of patrol shifts and special assignments including S.W.A.T., K-9, F.T.O., Traffic and Investigations that are there to serve and protect the citizens of Colton.
Crime Mapping
Online Reporting
Press Releases
/QuickLinks.aspx
[]